In March, Australia saw the fastest appreciation in house prices in 32 years, with Sydney leading the pack for capital gains, surging 3.7% over the month and 6.7% higher over the first quarter. However, we aren’t seeing the same figures for April.

According to CoreLogic, various indicators suggest the booming property market is steadying:

CoreLogic’s most recent report on home values highlights the clear drop in price in every capital city except Adelaide. (See graph below) 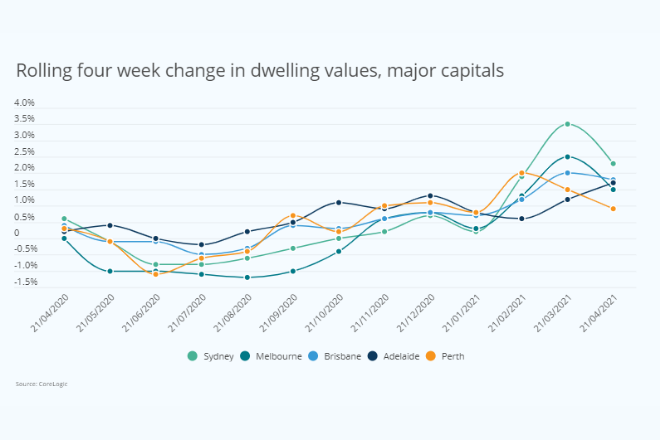 Across the combined capital cities, 2041 properties were taken to auction this week (ending 25th April) down from 2,467 in the previous week. Not only was there a drop in the number of properties taken to auction, but the average clearance rate has also dipped to 78% (the lowest rate since January 30th) signalling a potential slowdown in the Australian dwelling market.

Due to strong selling conditions, the week ending the 18th of April recorded the highest number of new listings added to the property market since 2016 (according to REA) with 26,470 newly advertised properties added to the market. With more supply, demand will even out which will ultimately lower prices.

For the first time in a century, population growth has turned negative, due to closed borders and stalled overseas migration. Although this has a more direct impact on rental markets, CoreLogic predicts we will also see a gradual impact on buying demand.

As the nation moves into a new phase of economic recovery, there will be less fiscal support provided which could result in a reduction in housing market activity.

We may also see a halt to further acceleration in rising house prices due to affordability. The number of first home buyers who are requiring financial assistance from their parents is at the highest since the last property boom back in 2017.

CoreLogic comments that although they believe capital gains have reached their peak, ongoing record low-interest rates and rapid economic recovery will keep consumer spirits high for a while; holding up the housing activity.